What's The Difference Between Liquid Chlorine and Chlorine Granules?

You now have a pool, or are thinking about getting one.  One of the biggest decisions you'll make in what type of chlorine to use, either liquid chlorine or chlorine granules, for your weekly pool maintenance.  Of course if you have decided on a salt pool, you have no worries about this particular subject.

But for those who may have a regular chlorine pool, it's a big decision, and you want to make the right choice.  Each type of chlorine has its pros and cons.  So let's dive in and see what the real differences are and when they could be applied to your pool.

Liquid Chlorine and Chlorine Granules Will Sanitize Your Pool

Both liquid and granular chlorine will do an excellent job for you. They'll properly oxidize, sanitize, and kill organic matter in your pool water to make it clean and safe for you  to swim in.  Both liquid chlorine and chlorine granules need to be handled carefully due to their hazardous nature.  Follow all the safety measures on the packaging, and always wear protective gear such as goggles and gloves while handling pool chlorine. 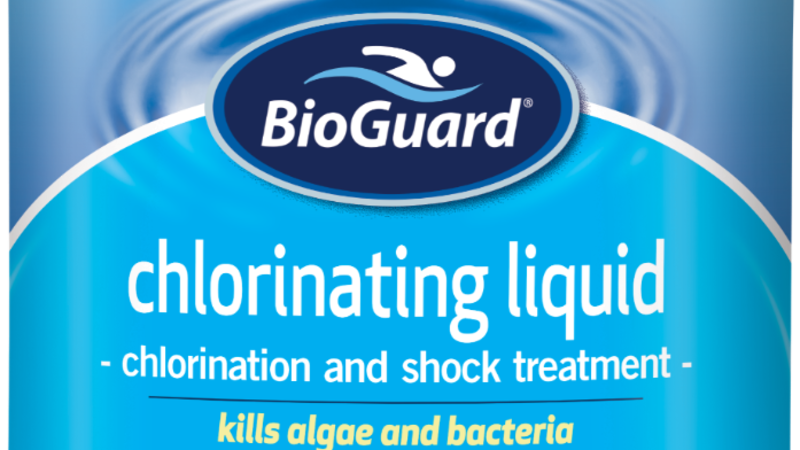 Liquid chlorine contains sodium hypochlorite which is the active ingredient and is the same chemical as grocery store bleach.  It begins working at killing organics as soon as it enters the pool water.  You can effectively use liquid chlorine for not only your regular everyday chlorination, but also for winterizing and spring pool openings.  It's a very affordable alternative to granular pool chlorine shock.  The strength of liquid chlorine can vary from place to place, but most sodium hypochlorite you'll find in your local pool store will be around 10% concentration.

Chlorine granules are the most widely available and used form of chlorine for home pools.  Just like its liquid cousin, it effectively kills algae spores and bacteria in your pool water.  Many commercial pools use chlorine granules due to their lower transportation and storage costs.  It's also safer to use and is easier to store.  If you spill a little on the deck, no big deal.  Just sweep it up.

There are mainly 4 types of chlorine granules and they are:

Its full name is sodium dichloro-s-triazinetrione or dichloroisocyanuric acid.  Dichlor has a pH of about 7 and is great when you need to get chlorine AND stabilizer in your pool quickly.  It dissolves rapidly and begins to work on contaminants as soon as it goes in the water.  Dichlor is a bit more expensive than other chlorine options and should never be used for weekly chlorine dosing of your pool or weekly shocking due to its stabilized nature.

Trichlor—or “Trichloro-S-Triazinetrione” is a type of chlorine that’s commonly used in swimming pools.  Like its stabilized dichlor cousin, it too can be used at a new fill or when you need to get chlorine and stabilizer in your pool quickly such as after a heavy rain.  And just like dichlor, you don't want to use trichlor for weekly chlorination and weekly shocking of your pool.  Your stabilizer will rapidly increase.

Which Type Of Chlorine Should I Use?

Well, that depends on your pool's needs in the moment.  Want as easy and less expensive way to chlorinate your pool that won't leave a residue, is readily available, and won't raise your pool's calcium hardness?  Then liquid is your best choice.  Do you have a very large pool with green algae and not much time to clear it up?  Do you want something that's easy to store and use?  Calcium hypochlorite might be good in that application?  Or was there a heavy rain last night and your stabilizer bottomed out?  Grab some granular dichlor and have at it.

You see, there's no right or wrong answer between liquid chlorine and chlorine granules.  They're all good.  It depends on your situation.  You can use them when you pool needs it the most.